Apple (NASDAQ:AAPL) released its annual roundup of its ever-expanding services business. The tech giant touted plenty of milestones for its services, from its App Store to Apple Books. While many of the numbers were mere points of interest, a few should stand out as important points for investors. What’s more, Apple is still playing it close to the vest with some information on its services.

Here are three numbers on Apple’s services investors should know. 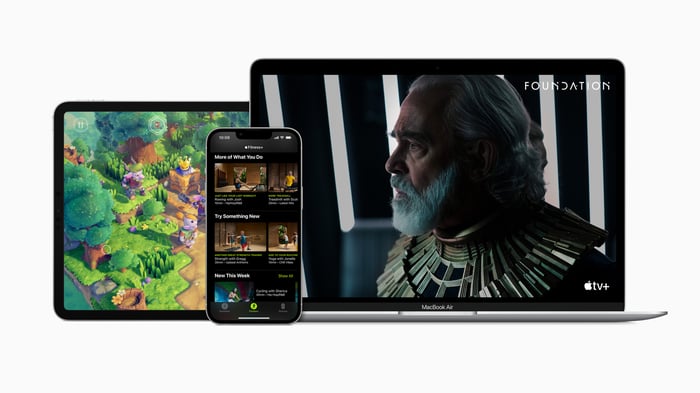 That’s the total Apple’s paid App Store developers since its launch in 2008. That number increased from $200 billion a year ago and $155 billion in January 2020.

Apple takes a commission of between 15% and 30% of gross sales. That implies the App Store brought in between $70 billion and $85 billion in gross sales, and Apple took $10 billion to $25 billion of that.

App Store sales represent a considerable portion of the $70 billion-plus in services revenue Apple brought in during the 2021 calendar year. What’s more, it’s extremely high gross-margin revenue, even compared to its other services.

That’s the number of paid subscriptions through the App Store, but it appears it hasn’t updated that number since it reported its fourth-quarter earnings at the end of September. While that number is massive, Apple has been adding more and more subscriptions every quarter. It added 45 million in the fourth quarter, after adding just 40 million in the second and third quarters.

The number includes subscriptions to Apple’s services, like Apple Music, Apple Arcade, Apple TV+, and iCloud, as well as in-app subscriptions processed through the App Store. While Apple collects just 15% commissions on most third-party subscriptions, the recurring revenue makes subscriptions a significant source of growth for the services business.

That’s the number of people visiting the App Store every week. That number is interesting when you compare it to Apple’s active installed base of iPhones, which reached 1 billion in January of last year.

There are a few factors that could be affecting that number. First, some people have multiple iPhones. One could be for work and the other for personal use. Or Apple could double-count those who upgrade their iPhone in a quarter, which is a substantial number when it’s selling 80 million new devices each quarter. Additionally, children could be using their parents’ Apple accounts in the App Store.

To be clear, the number of people visiting the App Store being less than active iPhones isn’t a bad thing. Rather, it indicates that the opportunity for Apple to sell even more iPhones is bigger than that 1 billion active device count would indicate. More people without an iPhone just means more people Apple can sell a new iPhone to.

Apple provided lots of numbers, like how many songs are available on Apple Music, how many games subscribers can play on Apple Arcade, and how many awards Apple TV+ received for its films and TV series. But it didn’t provide any indication of how many people listen, play, or watch those services.

It’s difficult to know whether Apple’s billions of dollars of investments in content for its services are paying off if investors don’t know how many subscribers it’s bringing in. Competitors like Spotify and Netflix show investors quarterly subscriber numbers and more transparency into their content expenses. It’s hard to gauge the success of Apple’s services without any indication of how many people are signing up for them.

Some subscriber updates for Apple’s services would be a nice gift for Apple investors — even if it just breaks out what portion of the 745 million subscriptions it counts for Apple services versus third-party services.

While the services business appears very strong, and it’s showing indications of growing quickly, investors will want to know if new services like Apple TV+ and Apple Arcade are showing the promise of paying off on Apple’s investments.

Why Apple’s AR/VR Headset Will Cost So Much