While we’ve been in the midst of apple picking season for a couple of months now, the process of caring for apple trees is a year-round labor of love.

While the trees seem to do all the work producing our favorite fall fruit, their sweet flavor can become impacted by changes in weather and climate.

What You Need To Know

According to the University of Illinois Extension, Washington takes the pie with nearly 50% of apple orchards in our country. New York is the second-biggest grower, followed by Michigan, Pennsylvania, California and Virginia.

Apples are grown in dozens of states, and it’s a fruit crop that can keep its residence through many generations.

So what type of weather takes the sauce when it comes to growing apples?

Let’s start with temperatures, shall we? Cool weather is something apple crops can tolerate, but when temperatures fall near or below freezing, it can damage the fruit.

Extreme cold can lead to a smaller crop, leaving farmers to rely on hardier, more limited fruits that survive the snap. Even though apples might survive a cold snap of more than four hours below freezing, they could weaken enough to shorten their shelf life.

Advection freeze and radiation freeze are two types of events that apple farmers are on the lookout for.

An advection freeze hits when a dry, cold air mass hits and conditions are windy throughout the night and early morning, radiating away any heat held within the plant and soil surrounding it.

A radiation freeze happens when a layer of cold, dry air forms beneath a layer of warm air on a clear, calm night, and if the plant turns colder than the air, it can suffer damage. 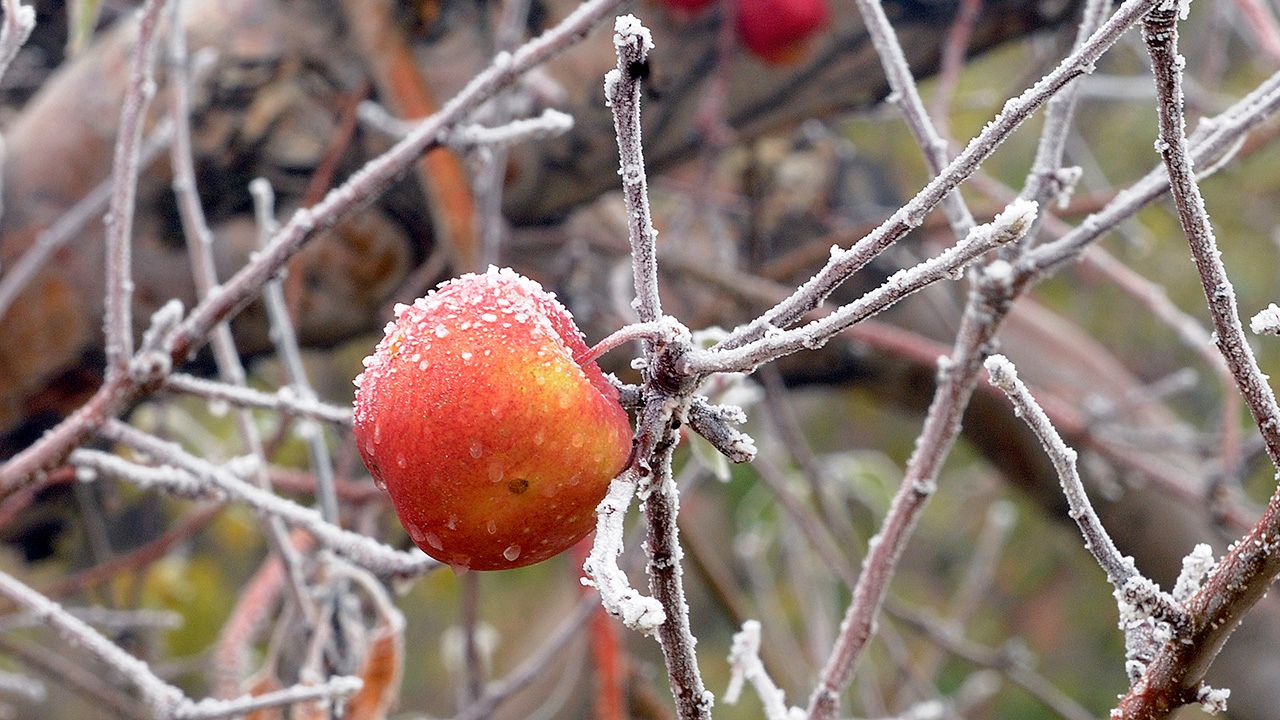 Frost can also be a big-time killer, especially if it’s a hard frost. While frost is a threat to apple health at any time, if it hits early in the season, it may be more difficult to recover than a later frost.

A spring frost can kill tender apple blossoms out of the gate, whereas a late frost can weaken mature apples. Mid-to-late season frost can slow the fruit-growing processes.

Frost that hits during apple growth can cause russeting that forms rusty brown splotches on the skin. While these blemishes may not impact the flavor of the apple, the defective fruit is put into a bin to be processed into juice, cider or sauce.

This is why farmers pay close attention to local weather forecasts and gauge what times they may need to apply frost protection methods such as covers, wind machines, heaters and water applications.

Although apple crops can grow nearly in any hardiness zone, apples tend to thrive in climates where it’s cold in the winter, moderate in the summer and has medium to high humidity rather than a hot and dry climate.

While it is possible to grow apples in warmer climates, apples grow best in regions where the temperature rarely increases above 90 degrees.

You see, apple trees tend to prefer some chill hours in which the temperature is in the 40s. This is why the northern states tend to have a larger variety of apples than southern states.

Apples hold the reputation of a robust autumn fruit crop that can withstand a wide range of temperature fluctuations, but some more extreme weather swings can alter that sweet flavor.

So, let’s get to the meat of it. After all, this is the magical time of the year when there’s nothing better than biting into a fresh orchard apple; but your apple could taste different from year to year based on weather and climate conditions?

Here’s what I learned. Warmer-than-normal temperatures can cause an early bloom that leads to changes in apple firmness and acid concentration levels. Too much heat and sun can actually “sunburn” apples! Excessive heat can alter an apple’s color, leaving it pink or brown instead of red.

A softer fruit may result from a high number of heating degree days. Rather than crisp and juicy, the apple may take on a mushy or mealy texture.

Strong storms with damaging wind can knock off apples or take out trees altogether. Hail is an enemy to apple growers as it can shear off fresh blossoms or create divots in mature apples, leaving them too damaged to sell.

Ice, snow and heatwaves can be detrimental to the apple.

A rainier season sometimes brings larger apples, and these apples are best for juicing and cooking. Excess rainfall can cause apples to grow into a softer texture that is more prone to bruising. Too much moisture during and after apple maturation can lead to molding, which can kill entire crops.

Smaller apples from a drier season can be a good choice for snacking on if you prefer a sweeter taste. The small apples in drier seasons contain less water content leading to a tastier flavor. 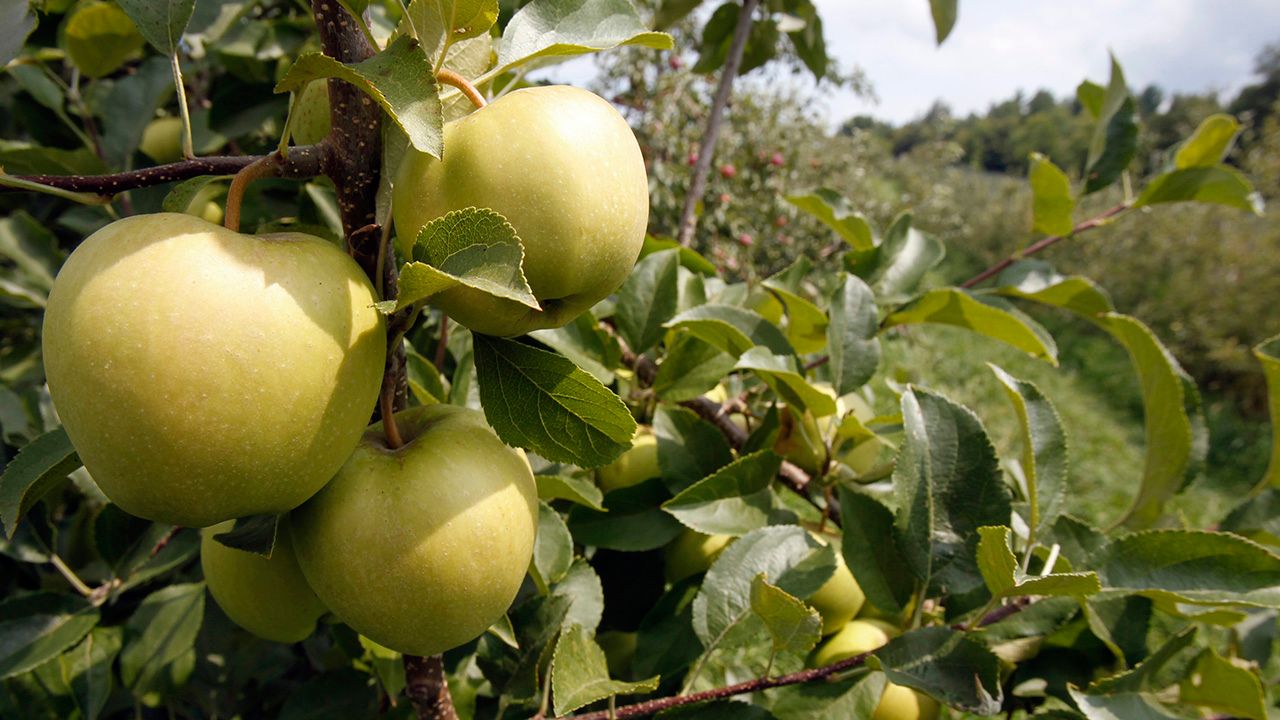 Apple varieties naturally run the gamut from sweet to tart, so what flavor are you attracted to?

If you want to take a bite out of a sweeter apple, go for a Honey Crisp, Gala, Fuji or Golden Delicious. These apple species are considered high in natural sugars and have a popping flavor when they are fresh in season.

Are you a tart apple kind of person? If so, then you may prefer Granny Smith, Northern Spy, and Braeburn.

There are a plethora of other apple types and some new hybrid breeds that may be worth checking out next time you are at the store or local farm market.

Apple crops are not only sensitive to everyday weather conditions, but they endure and attempt to adapt to changes in solar radiation, air pollution and carbon dioxide levels.

According to the USDA, changes in climate, like warming, can cause lower growth rates, smaller yields and diminished fruit quality.

Here’s a study on climate change and how it’s continually monitored for impacts on apples and other fruit crops, courtesy of Scientific Reports in the UK.

Extreme weather and out-of-whack seasonal temperatures tend to lead to more defects in the fruit, and it forces adjustments to the timing for harvest seasons.

New ways of farming and relocation might become the norm in the future for farmers to keep their crops going. 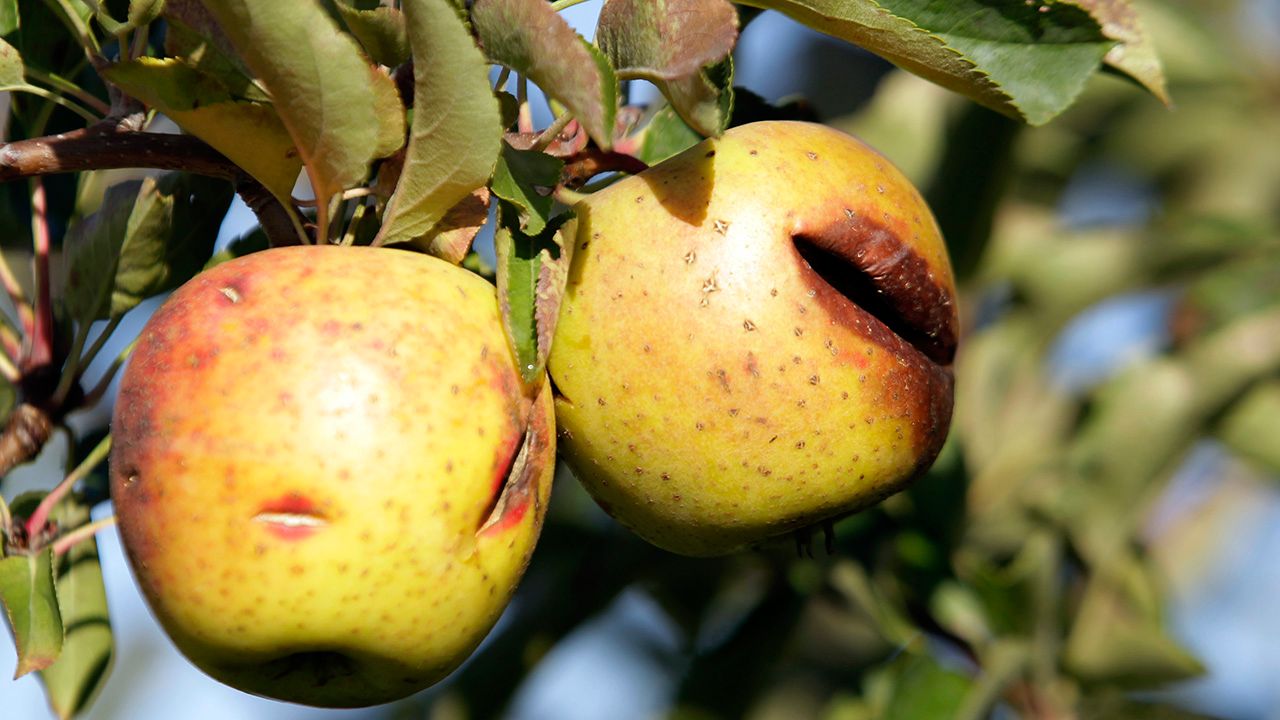 To remedy years of drought, farmers will need to install new irrigation systems. As a preventative flood measure, there is a need for updated drainage lines for excessive rainfall events.

Cool days and crisp nights are welcome in apple orchards across our country, but weather extremes are not.

Apple growers tend to look forward to the harvest season when apple-friendly temperatures not only benefit the flavors but draw in the apple-picking crowds. Farmers can also move their produce.

Also, cooler weather means more of us will begin to spend time cooking and baking apple-based products for our families!