Apple (NASDAQ: AAPL) has turned out to be a terrific investment over the past decade thanks to the company’s dominant position in the smartphone market, as evident from the stock’s impressive market-beating returns. 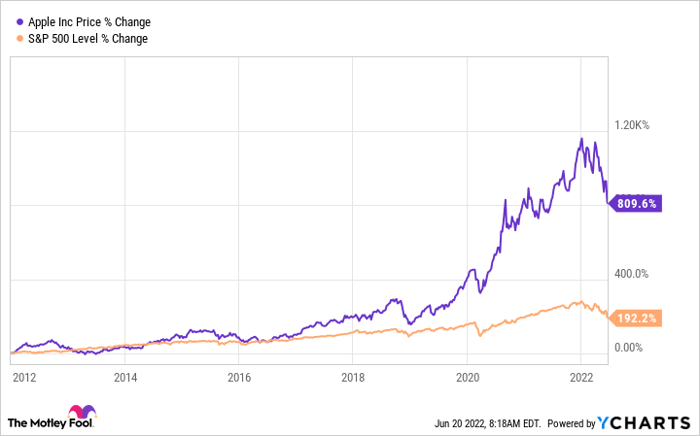 However, shares of the iPhone maker have been sliding rapidly over the past few months amid the broader stock market sell-off. Despite this, investors who purchased Apple stock a decade ago are sitting on fat gains, which demonstrates that buying and holding great companies for the long run is a sound investment strategy.

A $10,000 investment in Apple stock at the beginning of 2012 would now be worth just over $106,000, assuming the dividends paid out by the tech giant were reinvested. That translates into average annual returns of just over 25% over the past decade. But should investors buy Apple stock now in anticipation of similar returns over the next 10 years? Let’s find out.

With share prices down 26% in 2022, Apple stock is now trading at an attractive valuation compared to recent years. The stock’s price-to-earnings (P/E) ratio of 21 is lower than its five-year average P/E ratio of 23.5. Still, Apple is expensive as compared to its valuation in 2012 when it used to trade at just 12 times earnings.

But it is worth noting that Apple has come a long way in the past decade. The company generated $156 billion in revenue in fiscal 2012. In fiscal 2021, Apple’s annual revenue stood at nearly $366 billion, and analysts expect the company’s top line to hit $393 billion in the current fiscal year, which ends in September. So Apple has more than doubled its annual revenue in the space of a decade, and that has translated into impressive stock market gains.

That’s why the company’s richer valuation right now as compared to 2012 seems justified. What’s more, Apple’s P/E ratio is lower than the Nasdaq-100 index’s multiple of 23. So the stock is trading at an attractive level, and investors may want to grab this buying opportunity, as Apple could be on track for another decade of healthy growth given the company’s efforts to unlock new streams of revenue.

The next decade seems bright

Apple’s growth over the last decade has been driven by the booming sales of consumer electronic devices such as the iPhone, the iPad, the Watch, and MacBooks. The iPhone remains its biggest money-maker, generating $122 billion in revenue in the first half of fiscal 2022, which is 55% of its total revenue.

The future of Apple’s biggest business remains bright thanks to the rapid adoption of 5G smartphones. It dominated the 5G smartphone market last year with a 31% market share, according to Strategy Analytics. The momentum continued in 2022 as Apple cornered 45% of global smartphone revenue in the first quarter, compared to 42% in the prior-year period, according to Counterpoint Research.

The 5G smartphone market has a lot of room for growth. According to Ericsson, 5G subscriptions hit 660 million last year, and they are expected to hit 4.4 billion by 2027. This means that the iPhone is sitting on a secular growth opportunity, and Apple is pulling the right strings to ensure that it grabs it by expanding the iPhone’s addressable market.

For instance, Apple is reportedly working on a foldable iPhone that may arrive by 2025, as supply chain gossip indicates. Third-party research estimates that foldable phones could account for 10% of global smartphone sales by 2030. So Apple’s entry into this market could give iPhone revenue a nice shot in the arm in the future.

Meanwhile, the global augmented reality (AR) and virtual reality (VR) markets are expected to witness rapid revenue growth through 2030, with one estimate putting the annual growth rate at nearly 43%. Companies can take advantage of this potential growth in several ways, and it looks like Apple is already preparing itself to benefit.

The company is reportedly looking to jump into the AR/VR hardware market with a mixed reality headset, which is expected to become its next major product addition. Head-mounted displays (HMDs) and AR/VR headsets are expected to witness rapid sales growth in the coming years, with IDC estimating 35% annual growth through 2026.

Apple’s foray into emerging niches such as AR/VR hardware should help it increase its installed base of devices further. That’s going to rub off positively on the company’s services business, which has been growing at a faster pace than the company’s overall business. Apple’s services business has generated $39 billion in revenue in the first six months of the current fiscal year, an increase of 20% over the prior-year period.

Morgan Stanley expects this business to hit $100 billion in annual revenue next year, and that wouldn’t be surprising given Apple’s focus on expanding its installed base of devices. Additionally, Apple is diving deeper into the automotive market with its CarPlay infotainment software. It has lined up several major automakers such as Honda, Mercedes-Benz, Nissan, and Ford Motor Company that could use its software to power their cars.

Vehicles powered by Apple’s automotive infotainment software are expected to be announced next year. This could open another solid opportunity for the company to grow its services business as those car owners hopefully buy CarPlay-enabled vehicles.

In the end, there are multiple ways in which Apple may be looking to enhance its addressable market, and that could translate into robust revenue and earnings growth over the next decade. That’s why it may be a good idea to use Apple’s drop to buy more shares of this tech giant, as it could replicate its impressive performance in the coming years.

Our award-winning analyst team has spent more than a decade beating the market. After all, the newsletter they have run for over a decade, Motley Fool Stock Advisor, has tripled the market.*

They just revealed their ten top stock picks for investors to buy right now. Apple is on the list — but there are nine others you may be overlooking.

Do the Ring Doorbell and cameras support Apple HomeKit?