The recent lackluster price actions of bitcoin have been testing crypto traders’ patient as the trendless situation endures. While this seems no end in sight, many crypto watchers have been asking when this going to end? Should we expect a positive breakout or a price correction? A recent comment from a heavyweight crypto critic sheds light on the outlook of the leading cryptocurrency, and the equity markets may hold to the key of the next bitcoin rally. We have studied the nature of bitcoin as a safe-haven asset like digital gold, and we will explore bitcoin’s risk-on characteristic and what could trigger the sentiment to shift.

The prices of bitcoin have been in range trading since early July and the range has been increasingly narrow in recent weeks. While the markets seem generally believe that the dull price actions are part of the setup for the next big move of the leading crypto, many of the traders have been taking a wait-and-see approach, the gradual slowdown in trade volume could give you the picture (figure 1), some comments even go more pessimistic, saying that bitcoin dominance has peaked at 70 percent and will hardly back to the 80 percent levels we’ve seen three years ago. (figure 2).

While the big picture of bitcoin remains largely positive, such as the institutional platform Bakkt is expected to be in operation later this month. The platform provides only bitcoin futures products and it’s expected to boost the demand for bitcoin. However, many traders have been asking, when a breakout of bitcoin prices will occur, regardless of the direction. Well, the equity markets may hold the keys to it.

Just recently, a heavyweight crypto pundit has shed light on what could be the next big move for bitcoin, and what could trigger the move. In an interview with CNBC, Tom Lee, Co-Founder and Managing Director and Head of Research at Fundstrat Global Advisors, believed that bitcoin’s recent stalled price action was attributed by the stalled macro outlook. Lee added that “A world without trend, bitcoin doesn’t go up.” He stated that when the S&P reached a new all-time high, it would be bullish for bitcoin. When we look through the past two years, when the S&P was in range trading, coincidentally, bitcoin was in range trading as well (figure 4). This happens twice in 2018 and once just recently.

The S&P 500 has been inching closer to its all-time high of near 3027 after a month-long consolidation (figure 4). The SPX has been in range-trading mode since early August, bounced approximately in between 2822 to 2943. In early September, the index broke out and has been trying to reclaim July’s highs, and hovered just under its all-time high.

In an interview with Marketwatch, MislavMatejka, Chief Global Equity Strategist at JP Morgan believed, the US equity markets will rally into the end of the year. Matejka said, “The key call is that the US is not headed for a recession. The consumer is strong, interest rates are coming down and there are signs that global growth will rebound.”

Best of Both Worlds

Lee studied the comparative return of the S&P and bitcoin, he found that bitcoin does best when the S&P’s up more than 15 percent (figure 5). His findings concluded that bitcoin’s like a coin with two sides, on one hand when the markets experience turbulence, it acts like digital gold, on the other hand, when markets are in the risk-on mode, bitcoin could also be a risk-on asset. 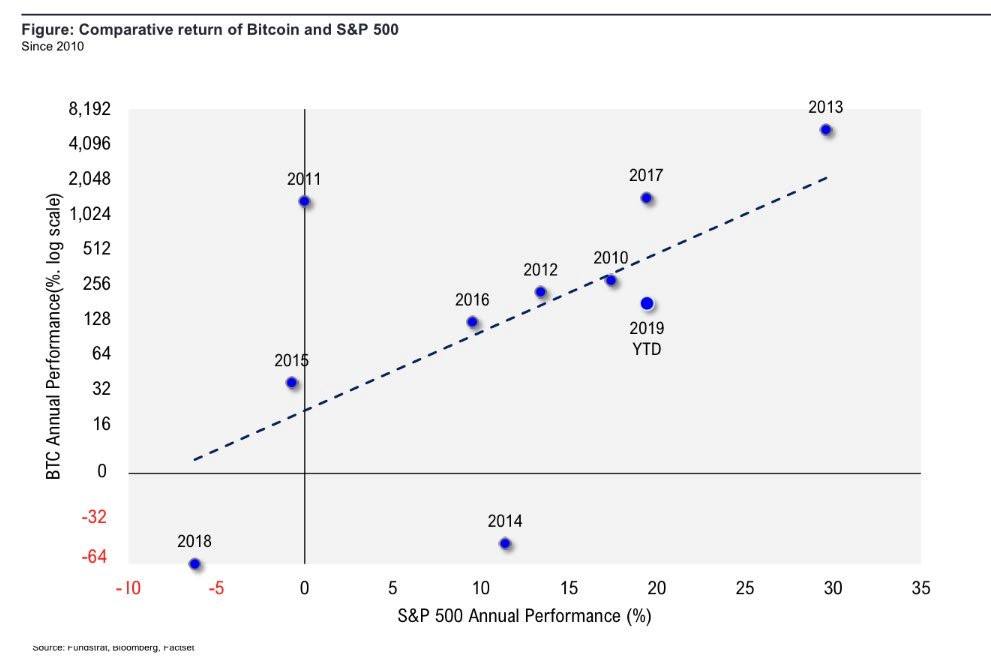 There were signs of optimism globally as we enter the final quarter of 2019. Looking ahead, some macro events could potentially be market movers.

Trade optimism: China’s trade officials are set to travel to the US this week to prepare for some high-level trade talks later in October. Although many believe that there’s much work to do to reach a comprehensive deal, the option of having an interim limited trade deal remains on the table. Meanwhile, Reuters reported that President Trump said a US-China trade deal could come before the 2020 election.

More rate cuts on the card: The US Federal Reserve rate decision is due on Wednesday (18/9), it’s widely expected that the FOMC will lower the interest rates by 25 bps again. The expectations of additional rate cuts for the remaining two FOMC meetings this year are building up, which came after the European Central Bank cut its benchmark rates early this month and restarted the bond purchasing program.

Safe-haven assets check: Generally speaking when markets are in risk-on sentiment, safe-haven assets such as gold and JPY would out of favor, and capital flow would increase in riskier assets such as equities and high beta FX. Let’s take a closer look of USDJPY, the pair traded above 108 most of the time this week, some analysts believe that the rebound could extend to 108.85. On the other hand, gold surged 1 percent after the oil facility attacks in Saudi Arabia, but still not much of actions around the 1500 area. However, the outlook of the mentioned safe-haven assets is still largely depending on how the markets interpret the Fed’s forward guidance.

We’ve seen the prices of bitcoin have been flip-flopping in a narrow range, while traders’ attention has been shifting to the altcoin world. However, according to a prominent crypto analyst, the bull case of bitcoin remains strong and rallies in the equity markets could trigger a fresh round of bitcoin buying and could turn the leading cryptocurrency from a safe-haven asset to a risk-on investment. However, the picture seems to remain somewhat mixed when it comes to a bull case of the equity markets.

Bitcoin could hit $100K in the future, Goldman Sachs says

What To Know About Bitcoin And Taxes

How Does Bitcoin Mining Work?